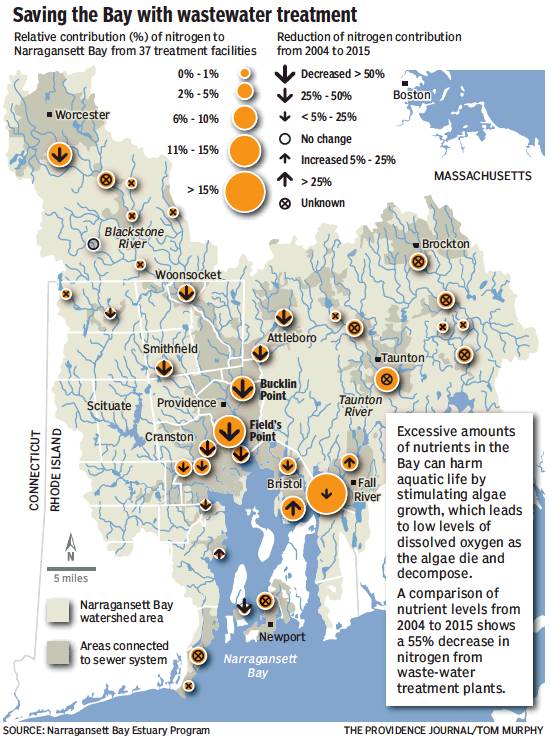 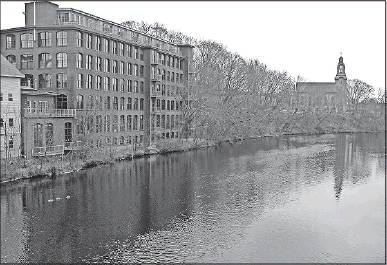 The Blackstone River in Pawtucket is a critical location in the Narragansett Bay watershed. [THE PROVIDENCE JOURNAL / STEVE SZYDLOWSKI]

PROVIDENCE — Rhode Island and Massachusetts have made huge strides in cleaning up Narragansett Bay by upgrading sewage treatment plants and reducing the amount of contaminated runoff, but those improvements could be negated by the impacts of climate change, according to a comprehensive report that will be officially released on Monday.

The effects — which, the report says, already are under way — include warming waters that could contribute to the growth of algae and bacteria in the Bay, rising seas that could flood low-lying treatment plants and more severe storms that could overwhelm stormwater infrastructure.

The 500-page report from the Narragansett Bay Estuary Program took three years to write and bases its conclusions on an analysis of 24 environmental indicators for the Bay’s watershed, which covers some 1,705 square miles and includes the Pawtuxet, Blackstone and Taunton river basins.

“If you look back to the Bay of the 1970s, it’s extraordinary the progress we’ve made,” said Thomas Borden, director of the estuary program.

But, he added, “The climate change implications are profound.”

John King, chairman of the estuary program’s science advisory committee, said that in many ways, Rhode Island and Massachusetts have been successful in tackling pollution that had plagued the Bay for decades. Solutions to the problems that are projected to arise, however, won’t be clear-cut.

“We’re improving the Bay and have achieved quite a lot in terms of reducing nutrients and contaminants,” said King, a climate scientist and professor of oceanography at the University of Rhode Island. “The bad news is there’s a steamroller coming called climate change. In a decade or two, it’s going to roll right over us and crush us.”

The report will be released at an event at Save The Bay’s headquarters on the Providence waterfront that is set to be attended by Rhode Island’s congressional delegation, Rhode Department of Environmental Management director Janet Coit and Massachusetts secretary of energy and environmental affairs Matthew Beaton. A workshop to discuss the report’s findings will follow.

It is the second report of its kind produced by the Narragansett Bay Estuary Program. The first was released in 2009. (Both are available at nbep.org).

In the eight years since the original report came out, a lot has changed. Although upgrades to the region’s treatment plants were under way following the historic Greenwich Bay fish kill in 2003, the positive effects of reducing nitrogen and other nutrient levels had yet to be fully felt when the first report was being written.

Likewise, the tunnel network under Providence designed to capture untreated stormwater had yet to be completed by the Narragansett Bay Commission, which operates the largest wastewater treatment system in Rhode Island.

The new report documents some of the benefits of those improvements. From 2008, when the combined sewer overflow (CSO) tunnel was completed, to 2014, fecal coliform bacteria levels in the Bay were down by 50 percent with even larger decreases in the upper portions of the Providence River.

Nutrients in the Bay in 2015 were found to be half of what they were in the 1990s, resulting in clearer water and fewer harmful algae blooms. Those improvements were due to the tightened regulations that forced treatment plants to upgrade their systems.

The new report summarizes past findings but also looks forward to future research and monitoring needs. One question of critical importance to the Bay is how treatment plants and the CSO network will be affected by the increasing rate of precipitation and rising sea levels, said Borden.

“The report sets up a framework for continued study of the Bay and its watershed,” he said.

King applauded efforts in Rhode Island to plan for the effects of climate change, singling out work by the state Coastal Resources Management Council and the University of Rhode Island. But he also talked of the need to step up efforts to protect natural lands in the watershed. About 15.5 percent of the watershed’s undeveloped land has been protected as open space. But 41 percent remains unprotected.

Preventing those areas from being developed is one way to help ensure the future health of Narragansett Bay, King said.

“It’s terrifying what the worst-case scenarios are,” he said. “But don’t throw up your hands.”